As I scan through my hand written notes (written on my Surface Pro tablet using the included stylus) from Build I realize there were a few more things that I did not list in my last notes that rate significant mention.  I would like to add that as of two days ago I managed to get Windows Phone 8.1 loaded on my Nokia Lumia 1020 and 1520 and know a bit more about a few of these items from personal experience rather than just something standing on the stage told me would happen.

All of these enhancements almost always have an impact (or should) on the way you create your apps.  In the following bits I'll outline what the features are and how they might impact you "as a developer".  There are more that I haven't listed yet.   As I use the platform I'll have more to say and as always remember that we are all working and playing with a Developer Preview and it might not be exactly the same in release to the general public.

One of the big fall downs on Windows Phone was the inability to really connect to my corporate network from a remote location.  Now, to be fair other platforms couldn't do it either in early days.  Of course, they've had more time to get it in the platform.  VPN.  It has arrived.  It means that I should be able to connect to my internal corporate network and opens the doors to remote desktop (for those with HUGE 1520's) and other useful bits.  Out of the box, the current version uses IKEv2 type VPN.  My VPN at the office is PPTP and is not supported just yet.  Not sure what the plan is but unless you have IKEv2 type VPN, it's a wait and see thing.  As an app developer this will allow me to create apps for companies specifically designed to run on corporate private networks and that's a great thing to offer potential customers.

Microsoft has always touted Windows Phone as the most personal phone choice.  "My Windows Phone" was a popular catch phrase.  Now they've added some additional features that even make it better.  Items like the nifty (and sometimes distracting) Start Screen background image.  Basically it means that Live Tiles with transparent backgrounds will pass through the image creating a mosaic.  People love to feel that their phone is their's.  They are going to use this feature even though some might think it makes things too busy.  As a developer you NEED to understand that it's quite possible that if your tile is NOT transparent with some icon or other in white (black looks awful) you might no longer rate being on the start screen.  That's going to be a problem, items on the start screen are run more often by orders of magnitude.  When was the last time you ran an app from the app list rather than start screen?  Those that have some picture like Kate Upton on their background want to see HER, not your tiles so get out of the way and let the user have their way. 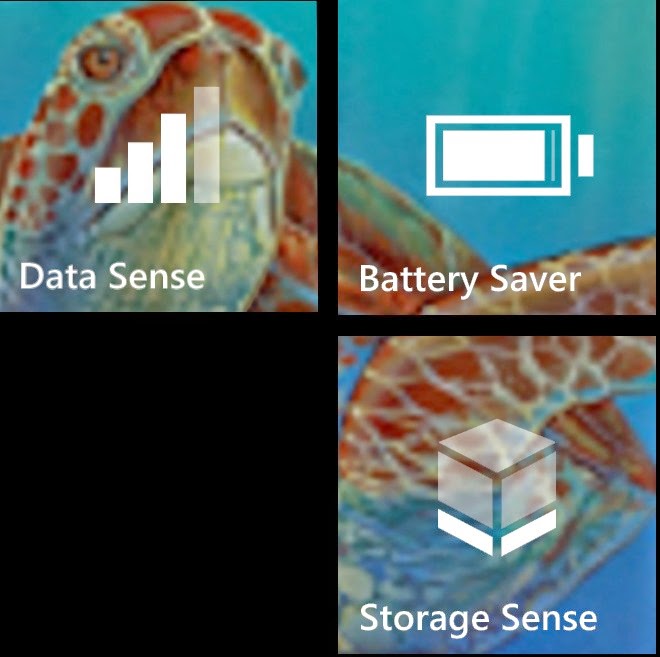 They've added or enhanced a number of apps that will help you use your phone more efficiently.  You had Data Sense in WP8.  NOW they've added Battery Saver, Storage Sense and Wifi Sense.  All of them but Wifi Sense have live tiles that tell you your battery life remaining, storage space left and how much pre-paid data you have left.  The Wifi Sense is supposed to automatically connect you to wifi hotspots wherever you are.  If the hotspot requires an email address and an "accept" acknowledgement, it will do it for you so you just get connected.  In practice that sounds pretty good.  Honestly I'm not sure if it's working in the current developer preview yet.  Will keep trying it out.  As a developer remember that its easier than ever for your customer to see how much precious space and data your app is consuming.  All of the items listed in the live tiles show details BY APP of what is being consumed, including which app is a battery hog.  Write your apps to be as efficient as possible.  Don't download gobs of data to be processed on the phone, put a web service in place that filters the noise and just sends what's necessary to the phone.  Make sure content in your project is needed.  If not, remove it so it's not deployed to the phone (remember that old background imaging you were toying with using???). 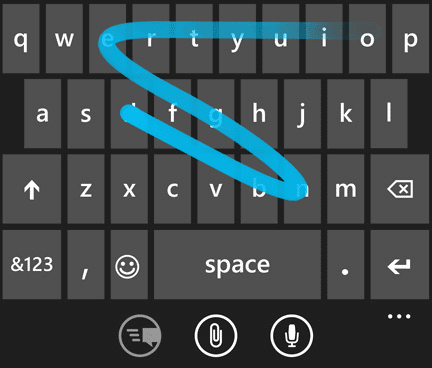 A new method of keyboard input is included.  This really is more on the user side than the developer.Developers should not be afraid of keyboard input.  It's getting easier.
You are going to initially think that no good can come of it. When I saw it at build I thought I'm going to suck at that.  And you know what, when I had a chance to try it on a Lumia 930, I DID suck at it.  At first you are worried about hitting every single letter.  However after having it on my own phone and discovering that it figures things out by what you meant (the general shape of your swipes) and not by you hitting every single letter exactly, I quickly figured out that it's pretty darn fast and accurate.  In fact I think it's more accurate than hunt and peck which is prone to errors from my overly large fingers.

Lastly is the fact that you can change your phone to display 3 tiles across instead of the usual 2.  Large format phones like the Lumia 1520 and Lumia Icon already do this by default but now you can have your 520's, 920's, 1020's and non-Nokia phones all show smaller tiles.  I tried it on my 1020 and found I didn't like it.  As a developer, it's a reminder that your Tile should be simple.  It should be obvious.  And, it should display only the information required.  If a user switches to a 3 across format everything gets a whole bunch smaller.
Posted by Mark B Schramm at 16:21